For anyone outside the startup world, “ecosystem” and “cluster” are meaningless terms economically. There is no real appreciation for the centralization of resources in certain cities or a group of closely knit towns in a given region functioning as their own independent economy.

In that respect, many Americans might be forgiven if they thought that the Canadian technology scene was wrapped up in the general American one. Just from the standpoint of people covering how tech hubs differentiate from each other in Silicon Valley, Israel, London, New York, Bangalore, and other cities, this clearly isn’t the case. What might be even less known is the limitations Canadian companies face relative to American ones despite the tight relations between the two economies.

Aside from major cities like Toronto, Montreal, or Vancouver, the ecosystem in Waterloo, Ontario is the most successful startup ecosystem in Canada —25th in Compass’ Global Startup Ecosystem report.

“Something is going on in Waterloo, because the applications we get from Waterloo students are better than those we get from students of any other university,” the report quotes Y Combinator co-founder Paul Graham as saying in 2013. The Lazaridis School of Business and Economics at Wilfrid Laurier University co-op program has become a massive technological spring board. After Stanford, its graduates are the 2nd most frequently hired by Silicon Valley companies. The school itself places 24th worldwide for computer science and 20th for math. That’s ri-donk-ulous.

The university’s prestige also shows in the city’s average founder age, 29.5, which is younger than thriving hubs like Tel Aviv (33.6) and Silicon Valley (36.2). Its 1,100 startups (according to resource hub Communitech) relative to about 500,000 metropolitan residents (including in sister cities Kitchener and Cambridge) places its startup density only 2nd to Silicon Valley. That’s 3.6% of all tech firms in Canada. The ecosystem is worth about $3.1 billion according to Compass, not far behind Montreal.

That number might be higher after local Kik.com got a unicorn valuation in August following a $50 million investment from Tencent. Other companies that have had success are Thalmic Labs and Vidyard. It’s the manufacturing capital of Blackberry and Google acquisition PostRank.

But the city is hampered not merely by things unique to Waterloo, but also nationwide problems affecting Canada’s technology sector. 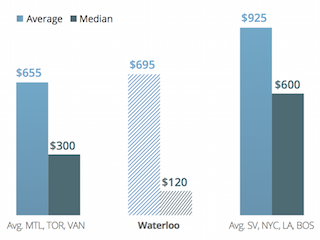 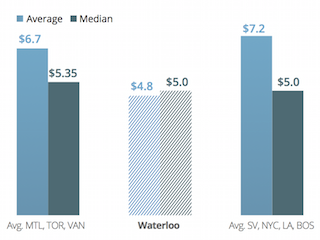 “The problem isn’t headquartered in Canada. Nobody cares about that anymore. They need to talk to global customers at the start. Once more than 50% of your customers are foreign, then your priority is foreign,” Compass CFO Jean-Francois Gauthier says to Geektime. Gauthier, a former CEO himself in the much more sprawling Montreal, Quebec, says it’s about getting up and going. Waterloo companies offer their products in an average of 2.1 languages and only 16% of companies have offices outside Canada.

“Canadians have the illusion that because they are so close” to the United States, they can stay north of the border. “The problem when you hire a VP Sales in Canada is it is very different culturally,” he notes.

This is a key point for Canada’s startup ecosystem. Both Americans and Canadians outside the business world won’t realize that just because there are major social parallels between the two countries’ cultures doesn’t mean that such parallels run close when it comes to business negotiations. Americans are indeed shrewder than Canadians and the pitch culture is quite different. Plus, you can’t expect Canadian salesmen to have as many American peeps in the Roledex.

“Looking at the growth rate, it is still slow even when they focus on foreign customers. The big difference with places like Tel Aviv or Berlin is they don’t have the illusion they can reach foreign markets with home base management,” says Gauthier.

“At one point I went to a dinner with a bunch of Quebeckers and this guy starts talking down his own technology when telling us about the company. You can’t do that in the States,” he explains.

Canadians might also be more conservative investors who are used to proven sources of income earning investment dollars. There is definitely enough money in Canada to drive the country’s clusters, but they need more liquid. In a country whose largest companies make a killing on manufacturing and natural resources, they’re not as used to tech.

The result? A major funding gap.

Seed rounds average $120,000 compared to about $500,000 in NY, SV, Boston, and LA. Four times fewer Waterloo companies than SV companies get funding at all. There are only 120 angels in the local Golden Triangle Angel Network, which follows an “80-20 rule” according to the report — 20% of them are really interested and yet they invest in only 80% of the companies.  SV doesn’t have this issue as the bulk of its angel community comes from former startup CEOs who successfully exited the market. They aren’t afraid to invest and they know what they’re looking for.

“The issue is that most people with money don’t invest in tech,” CEO Carol Leaman of Axonify said in the report. “There is lots of wealth but that’s not how they made their money so they are scared of it.”

The result? Four times fewer Waterloo startups get any funding at all compared to SV companies. The average seed funding is 63% of what American companies get. All in all, they’re getting trounced.

But it’s not a Waterloo-specific problem. It’s a Canadian problem. Montreal, Vancouver, and Toronto are seeing similar funding shortages for their early-stage companies.

Waterloo is also isolated. One of the key recommendations of the Waterloo startup economy report by Compass is that the city needs to link up with Toronto and market itself as one larger ecosystem. It will attract more investors to both cities — via Toronto’s airport gateway of course — to scout a quantifiably more impressive startup hub. Instead of 1,000 startups in an isolated small city or a kind of meager 2,500 in Toronto, you’re talking about a larger cluster approaching 4,000 companies.

“If you want access to great talent and big investors, you need to be in a big ecosystem because small ecosystems won’t attract those people. They live in Toronto, New York and SV. Bigger is better,” the Compass report stated.

Still, a proposed high-speed Waterloo-Toronto train is around 10 years off and needs $2-3 billion to get on the rails (there is currently a line from nearby Kitchener, but it runs infrequently and only to Toronto in the morning rather than vice versa). But ahead of that, the best thing Waterloo could do would be to get that headline-grabbing exit.

“Berlin’s trigger was back-to-back large exits. People took notice,” Gauthier says of the city’s startup hub that developed out of its trendiness as a cultural magnate. That hasn’t happened yet though, and theories abound why. The most popular is that Canadians are either satisfied with early exits (and smaller sales) or they are afraid to go from startup to scaleup to grab that $1 billion bonanza.

The controversy right now is how much that Silicon Valley hiring rate of Waterloo graduates eats away at local talent. Fears of brain drain perpetuate local leaders, but they need to take a social anxiety pill says Gauthier.

“Canadians can’t look at the brain drain as a portion of the problem. They need to strengthen the Canadian international network. Like the Israeli and Jewish community does, they pay it forward and help each other. Otherwise you prevent the success of companies,” he believes.

He compares Canada’s anxiety to Israel’s expatriation. Sure, all the top Wix management moved to the U.S., but the other 90% of the company — all the engineers and developers — stayed home and got rich off the sale. Now they’ll be putting a lot of those proceeds back into the local startup economy.

Gauthier asserts, “If you prevent those people from going over, that will never happen here. They’re going to become entrepreneurs and investors. Please go to the U.S. and make the engineers rich, serial entrepreneurs.”

New concept: Booking meeting rooms at the heart of Tel Aviv by the hour

Google News update is challenge to Facebook on reliability

Swedish startups rally to defend Pakistani developer being deported because of...

Hila Haimovich - June 7, 2016
0
The hibob platform offers a specially designed HR system that includes a digital insurance agent guaranteed to be objective on behalf of the employee